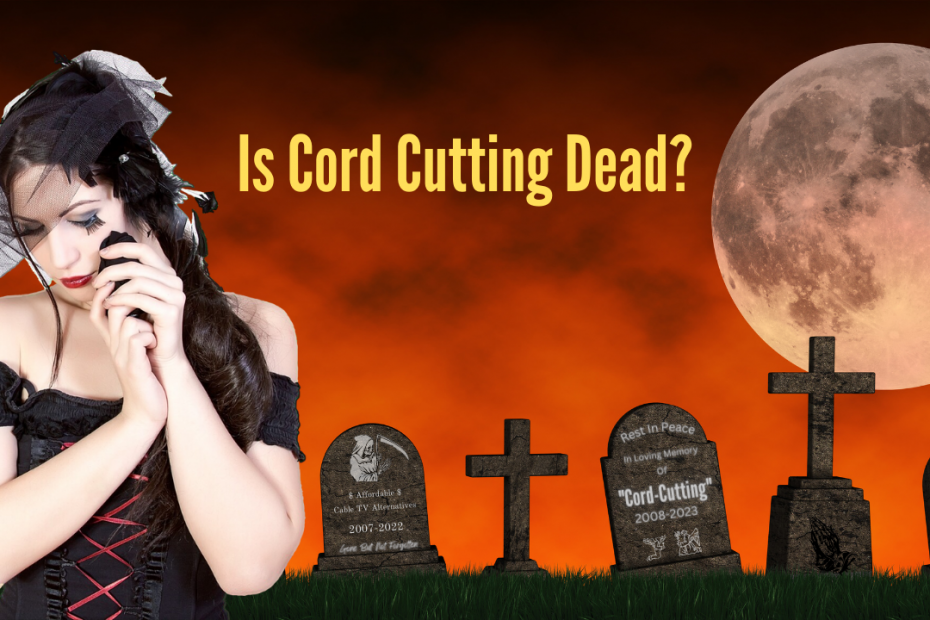 Is cord-cutting dead? That’s the question. Is it still possible to save money by “firing your cable company” and subscribing directly to your favorite streaming platforms? Or, has the cost of high speed internet, along with the market being over-saturated with streaming apps, and rising subscription prices effectively made “cord-cutting” a thing of the past?

Everyone has their own reasons, but this is my personal story of why I decided to “cut the cord”.

Not long ago, before I decided to cut the cord, I was spending $240 per month for satellite tv service. My plan had over 300 music and television channels, access to some on-demand content, a DVR to schedule and record broadcasts, and it included the monthly rental fees for the receiver boxes that were set up in each room.

Now, I’ll be the first to admit; it didn’t seem too bad at the time. Compared to similar plans, I was actually getting an awesome deal. Right? Wrong!

As time moved on, I started realizing that not only am I’m paying $2,880 per year for channels that I never watch; but I’m also paying a pretty penny to the cable company for my internet with home phone bundle. Moreover, I was paying my wireless carrier for a mobile phone plan, which at the time didn’t offer unlimited data.

That’s when I came to the conclusion that something had to change.

However, effecting that change would prove to be easier said than done.

Although I lived in a big city, my choices were limited. The only television service providers available in my area at the time were the satellite company that I was already using and the cable company that had exclusivity in my neighborhood. Both options were expensive and required lengthy contracts.

I felt trapped! The “cable industry” had a monopoly and there seemed to be no way around it.

Until one day I thought to myself, “You know, that Netflix app is pretty remarkable!” After all, not only does it have great movies and some binge- worthy TV shows, but they also have original content.

Moreover, since the Netflix app is available across multiple platforms like streaming devices, computers, smartphones, and tablets, I would no longer have to referee the shouting matches that took place on a nightly basis between my kids as they fought over what to watch.

Now some might call what happened next a “moment of clarity“; while others would say it’s nothing short of Devine intervention. But, whatever you call it, I, like so many others, had an epiphany and I asked myself a question that would change my life forever.

“What if I got rid of cable tv and just used apps like Netflix? It was at this moment that I officially became a “Cord-Cutter”

What is Cord Cutting?

Cord-cutting refers to the process of switching from a pay-TV subscription (cable, satellite, or telephone company) to an Internet-based streaming service such as Netflix, Sling TV, Fubo TV, Vidgo, and Philo TV.

The purpose of cord-cutting is to save a substantial amount of money each month while still having access to the quality programing that you enjoy. Cord-cutting has, and continues to be a growing trend that has forever changed the way we access content.

Is This A Case Of Too Much For Our Own Good? – Is Cord-Cutting Dead?

When it comes to streaming options, Cord-Cutters today have more choices than ever before. From free streaming platforms to popular low- cost options (such as Starz & Paramount+), it’s never been easier to access quality entertainment at home and on the go.

But when you factor in the cost of high speed internet service, a market that’s over-saturated with available streaming platforms, and rising subscription prices. You might be better off signing up for service with your local cable provider.

Advantages of cord cutting include:

Disadvantages of cord-cutting include:

Although the line between cable-alternatives and the mainstream cable tv providers has become blurred. I still don’t think cord-cutting is completely dead. There are still some low-cost and in some cases free options still available. Like Philo TV, Vidgo, Roku TV, Peacock, Starz, Paramount +, and Amazon Prime.